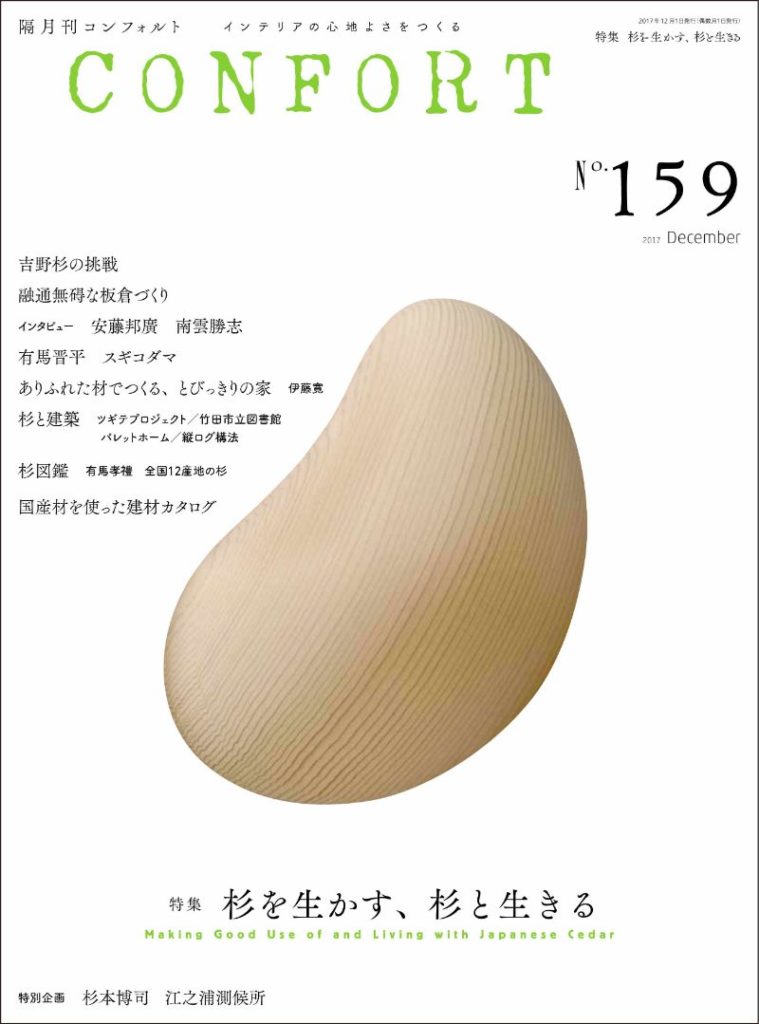 The Work of Shinpei Arima

From small ones that can fit in your hand to big ones that children can sit on, SUGICODAMA sculptures created by Shinpei Arima are just like life forms of Sugi (Japanese cedar: Cryptomeria japonica). They inspire an instinct in people who see or touch them.

“Young Sugi (Japanese cedar: Cryptomeria japonica) and old ones are very different. Not just 100 years old, but 200, 300, or older, they are clearly distinct from trees that have lived for several decades.”

The encounter with a Sugi board of a 500-year-old tree led Shinpei Arima to create Sugicodama. Until that time, he could not find the perfect material for his creation. Though he learned FRP molding at the university, he knew by intuition that more natural material would be better for his works. He tried to use shells or clay, but they didn’t fit.

When he was a graduate student, he held workshops and events at some places like a closed elementary school in the region as part of his study of art education. He also planned an artist-in-residence program and created his own works, but still he could not find material suitable for his creation.

In those days, he used Sugi remnants given from a local sawmill to produce blocks in the workshop for children. There was no particular reason to use Sugi, but the region, Oita prefecture, abounds in Sugi trees, so they were offered for free.

People working at sawmills often said to him that Sugi was not selling well, but he had nothing to say in answer to that. He thought he could do nothing about the problem of forestry. Sugi had been a familiar material for him, but still nothing more than that at that time.

In 2007, at a lumber dealer he had just dropped into, he was attracted by a certain wooden board. It was 500-year-old Sugi.

He immediately purchased it and started to carve without concern for what form it would take. After, he just shaved with a pointed knife and polished it, touching it with his hands for a few days; the original form of Sugicodama appeared in his hand.

It reflected what had been whirling through his mind. In his childhood, he enjoyed swimming in and fishing on the river in his hometown, Saga prefecture. Although there was abundant nature, he was told that it had already changed a lot from the time of his father or grandfather. He had been concerned about how the nature around us would be changing in the future.

He saw something about the changing relationship between nature and humans in the piece appeared from old Sugi. And he thought it could be his own work.

Arima says, “The old Sugi was completely different from what I thought was Sugi. And it taught me that I had seen things from a one-sided point of view.”

Old Sugi is special for not only its presence, but also its thickness. The trees grow under severe environmental conditions, such as poor soil or lack of sunshine, are very thick inside, and have a hard core. Conversely, if they grow under rich conditions like a forcing cultivation, their cores are decayed quickly. On the other hand, there are old trees that survive for a long time even though their cores are decayed. As he produced his works with Sugi, he learned more about its properties and surrounding environment. The more he learned about it, the more interesting he came to find it.

The sculpture is named ‘Sugicodama’. ‘Sugi’ means Sugi. ‘Codama’ means a small sphere, an echo or the spirit of trees.

A Hole hollowed out by a flying squirrel

A palm-sized Sugicodama is usually made from old trees planted in a shrine and fallen by a heavy snow or a typhoon. There are very few trees over 300 years of age in artificial forests for building materials.

On the other hand, a big Sugicodama is made from trees between 120 and 160 years old raised in artificial forests. Since their annual ring is wide and hardness is not uniform, it is difficult to sculpture small Sugicodama out of them.

Arima explains “Most of them were planted in the time of our great-grandfathers. Though trees over 120 years of age have been the best building materials, the number of sawmills which can saw up large trees is decreasing because of changes in the lumber system and sizes in demand. The sawmill in my neighborhood has closed, so now I’m concerned about how to get large trees sawed for my works.

He had been thinking of producing large Sugicodama since he created the first works, which were small, and he started to produce large works when he had gotten enough skills and tools.

One day, at a lumber market, he found a large Sugi tree with a hole in it.

“The hole was perfectly round. It was scratched and smelled of wild animals, so it might be a tree burrow hollowed out by a flying squirrel. It inspired me to produce Sugicodama with a hole.”

Sugi forests, which are planted by people, are regarded as troublemakers, blamed for things such as the cause of hay fever. But Arima thinks that the rich forests, which flying squirrels can live in, are somehow preserved thanks to planted Sugi forests.

Sugi varies widely depending on not only its age. Arima explains, “Even Sugi in the Kyushu area is not the same. Each small region has different tastes, and has planted a specific variety.”

There are specific varieties suitable for making boats, houses, or buckets, and they are grown in a certain climate, so each Sugi tree is different. At the same time, Sugi has a habit of growing straight and uniform all together. Because of that habit, it has been appreciated and expected for standardized building material.

“I don’t know which is influencing which: Sugi or people,” Arima says.

Similarly, he lives his own life facing Sugi and influencing each other.

As he is moving his hands conforming to various Sugi, he might hear voices of trees or animals living within them. Those voices might form into Sugicodama.

The older the better

Kenichi Someya, the carpenter who taught how to purchase raw wood at the market to Arima, repeats that older trees are better to use, even if only 10 years or 20 years older.

As Arima was inspired to create Sugicodama by the strong presence of the old wood, they have a special power received with the passage of time. Although the tree’s lifespan is much longer than that of a human, we have been incorporating trees into our lives as wisdom for surviving. In other words, Sugi has endowed us with the ability to look over the things we could not see in a human lifespan.

It is considered that Sugi has flourished widely since prehistoric times of the Japanese islands. First, people used Sugi trees as much as they wanted, and then, gradually, they planted them intentionally. It became what is called “natural forests.” Sugi of prehistoric times is sleeping in the earth, and appears by chance. Now it is hard to find natural forests which preserve large Sugi trees over 500 years of age.

The question is what kind of relationship we would develop with contemporary forests, which were planted in the time of our great-grandfathers or later. We kept talking about topics related to Sugi, of which a clear answer did not exist, through the interview.

When the interview was nearing an end, on our way to the nursing home which Arima’s works are placed at, private stories of our elderly parents became a topic of conversation. The photographer Kudaka calmly said, “It seems that my parents are happy when they serve someone well in some way.”

Being of service to someone can be a source of energy for people of all ages.

Old trees serve a lot of living things, growing new leaves even when their trunks are riddled with holes. And even after they are cut down, they leave a trace of their lives, changing form into something which resonates with people, such as Sugicodama.

The older the better. That is truly ideal for us. In reality, however, not everybody can live long.

I see wounded old living trees in awe and wonder if it is painful.

Aima sees wounds in old Sugi trees while he is producing his works. They serve others, keeping wounds inside during their lives, and then they are reborn and disclose their wounds.

“As I am facing Sugi, I cannot find a clear line between what is life and what is not.

Although animals and plants live in a certainly different way, the two have something in common,” Arima said. This sense leads him to create the next Sugicodama.

Born in Saga prefecture in 1979. Living in Oita prefecture.He started art activities when he was in graduate school.He produces sculptures with Japanese cedar at his atelier near Yusuhara Hachimangu shrine.The work he is sitting in is Sugicodama placed at the entrance of “City Care Hakata,” the nursing home in Fukuoka prefecture. Everyone who passes by touches it unintentionally.